A friend reaches the final portage 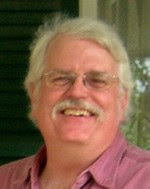 Most of his friends and acquaintances will have undoubtedly received the news in other forums, but I must also comment here, though I have been remiss in timely postings on other matters.

Mike Ameling, "that grumpy old blacksmith out in the Hinterlands", has died at age 56.

I first met Mike when we took the "Grand Portage Choir Boys" tour van to DeChartres Spring Frolic a number of years ago. The thirty-somethings through fifty-somethings piled into the Timmerman's van (the "Otter" family van for those of you who know Tim and Brenda) and headed south.

It was, to say the least, a rollicking good time, and has been every year since. Although only two of us in that crew could be considered "liberal" or other left-leaning labels, and we definitely did not agree on any number of political issues, we became nonetheless close friends and comrades.

Mike was a blacksmith, and more. Amongst his other skills and areas of knowledge, his study of the firesteel, an integral part of anyone's interpretation of our time period, was comprehensive, spanning Roman times to now. His artifacts were fascinating and his reproductions were amazing. His reproductions now reside in various interpretive centers. Many camps have any number of his fire steels, metal pipes, rat spears, chisels, knives, and more.

Beyond that, Mike was a really nice guy. That "grumpy" epitaph was just a label he liked, I suppose because he really did live in the hinterlands. But he was kind and generous, and like many Midwesterners, ever self-effacing.

Mike, you deserve all the compliments and honors and love your family and friends around the world are pouring out to you.

Godspeed, Mikey, and we'll see you further down the portage.

And so another month has passed; how time flies and how fleeting the enterprises and intentions of man . . .

In the while, though, amongst life's other endeavors your correspondent has found time to continue the exploration of 18th century inks, the creation of ink powders, and the formulations necessary to create a powdered ink suitable for reenactors and others interested in this the task of writing in this time period.

In the past month, I have found my way through at least 4 to 5 works on ink, ink of the 17th and 18th century, and chemical composition of such ink, not to mention other works related to the function of the clerk. I am indebted to a large extent to Jack Thompson of Thompson Conservatory, mentioned in previous postings, for leads to a number of the works--either through his direction or found amidst reading such.

I think I have arrived at a suitable ink which I can render in powdered form and which I will be making available in a period packet shortly.

A few remarks, however, are necessary as a result of the my various readings, especially so given postings regarding inks on other bulletin boards.

1. Iron gall ink, other postings elsewhere not withstanding, is the proper writing ink to be used for our time period of the 18th century. It goes back much further, probably at least to the 9th century though carbon inks were also in use early on. In the class of carbon ink is included the "logwood" or "lamp black" inks. These carbon based ink were not desirable in that they did not meet the test of suitable ink:

To wit, "The requisites of a good black writing ink or black writing fluid require it to flow readily from the pen, to indicate in a short time a black color and to penetrate the paper to an appreciable degree, and more important than all the rest, to be of great durability. When kept in a closed Bessel no sediment of any account should be precipitated, although such will be the case in open ink-wells, and this the quicker the more the air is permitted to get ot it. If it is to be used for record or documentary purposes it must not be altogether obliterated if brought into contact with water or alcohol, and should depend for permanency on its chemical and not on its pigmentary qualities. . . ."

(David Carvalho, "Forty Centuries of Ink", Banks Law Publishing: NY, 1904, p. 132; plus a variety of other authors including Mitchell, "Inks: Composition and Manufacturing", Griffin and Co.: London, 1924; and Barrow, "Black Ink of the Colonial Period" in American Archivist, 11:4 plus the bibliographic references contained in these works).

2. The point made in all the works I have read agree that the image produced by the action of writing with ink is best when the ink penetrates the fibers of the material written upon, not a surface image (which is what carbon inks accomplish). In other words, when you write on paper with iron gall ink, the image is produced not by the application of opaque material upon the page but by the chemical reaction of the gallate tannin in the ink actually absorbing into the fibers chemically and changing its composition and hence color.

This is the reason why the various calligraphy inks and so called "period" inks sold by various companies are inadequate. In the experiments I have done, those little packets sold with or without a quill produce a nice, shiny, black ink that runs, smears, or otherwise is obliterated when wet.

If you examine period writing, especially period fur trade journals which underwent some serious abuse in their time of use, and then later storage, you will not that even under the insult of liquid of various types they are still legible, not having run or smeared.

3. Other inks, such as "India ink" or "Japan ink" are not and were not considered appropriate ink for writing as they "clumped" up or otherwise impeded the use by quill, being better suited to the brush of Chinese and Japanese (and Indian) writing. Such ink was better suited of artistic endeavor.

4. Powdered inks, contrary to the surmise of the archivist I quoted in an earlier post, seem to have been made from dehydrated or dried ink rather than a package of the various dry ingredients finely powdered, mixed, and sold to be later constituted with water. In the various reading mentioned, all mentioned this latter to be undesirable, creating a very pale image unsuitable for writing (perhaps if left long enough for the tannin to leach . . .).

At the same time, however, powdered inks were found to be inferior to the ready made ink "from scratch". In the "wet" ink, the pigment is held in the solution while the process of drying and reconstituting takes away this property and holds particles in suspension rather than solution.

I have found this to be the case in comparing my "wet" and reconstituted inks. And yet, the ink from powder, though seeming to be applied as a thin and pale solution to the paper, turns a dark black upon the paper as the ink dries and oxidation takes place (this oxidation being the cause of the dark image on paper created by iron gall ink).

Based upon those considerations, and more, the ink I have formulated meets the tests of readily flowing and penetrating the writing surface fiber to create a permanent, black record.

Given the choice of ink made from ingredients (that is, purchasing "wet" ink) or ink made from powder, I would probably opt for buying a bottle of prepared ink, from my readings and my own experience with making ink.

But, given the mess that carrying around ink prior to use, especially prior to sale, ink powder seems to be a good avenue. The product does not seem to suffer from the drying process, though shininess is not evident any longer. This really doesn't seem to be an impediment as a shiny line doesn't seem to have been a prerequisite of period ink, and ink powder was a common product.

It seems that those wishing a shinier ink can merely add a bit of sugar, or even mix the powder with white wine rather than rain water (both period formulae). Though vinegar is sometimes suggested in period recipes, vinegar has been found to be detrimental to paper.

One other note to this rather long exposition, period recipes call for the boiling or at least use of warm water to process the gall nut. In the course of reading, I have found that the better method, found later (but possibly used by some??), should have been a cold soaking.

Ultimately, the cold water method is what I have ended up using by default and without a thought. After the cold water soaking for a few days, or possibly allowing soaking in the warm sun, I have usually strained and then reduced the concoction by boiling it to half before adding the other ingredients.

I hope to see some of you at the NAVC Fall Gathering at which time I hope to have some sample ink powder packets for perusal. For those of you wondering what is this NAVC Gathering and what goes on, click on this link to see our Fall Gathering Preview newsletter. Having Adobe Reader 9 will provide best viewing of all PDF documents.