We're just a month away from one of the country's best educational programs for reenactors and interpreters, especially those involved with the fur trade of North America.

The North American Voyageurs Council presents Fall Gathering 2010 the first weekend in November. This year we are meeting at the Forts Folle Avoine near Danbury Wisconsin. Folle Avoine is the site of two fur posts, the North West Company and the XY Company, which have been reconstructed on the original footprint. Attendees will be able to sleep right on the same earth that Michel Curot, John Sayers, and George Nelson, amongst others lived.

Some exceptional workshops this year, plus an appearance by none other than Punch and his 18th century coterie of mayhem.


Hope to see you there!
Posted by The Clerk at 5:37 PM No comments:

Not much to report of late since moving from one event to another over the past 8 months has meant equipment repair and preparation, not to mention also working.

Last weekend was the Fall Gathering at the Snake River fur post in Pine City which was great--good weather, better friends!

Coming at the end of September/first weekend of October is the Living History Event in Eagle River, WI. This event used to be in February (-40, as seen below). Should be be much warmer and, I hope, drier than it has been the past few days. 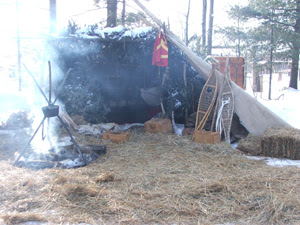 I'll post some pix of the trade goods I've prepared for this year's event--packages and fabric bolts. Between my goods, Karl Koster's, and Dave Klessig's I think we'll have a very full trading post.

Haven't had a chance to get out to gather oak gall due to weather and other commitments. I hope to get out next week or the first week in October.

I will be processing the oak galls at Eagle River in preparation to make more ink to dehydrate for powder (batch number 5; batch number 4 was small but very nice and for sale along with a couple of batch 3 left).
Posted by The Clerk at 8:26 PM No comments: 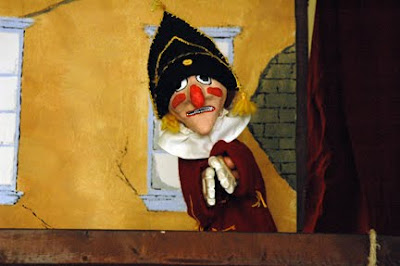 Early one evening during Rendezvous week at Grand Portage, Mr Punch made his appearance. No modern or PC character he, this was the 18th century antagonist, the street theater Punch of Everyman.

The English street show grew out of the Commedia del Arte tradition of Italian theater. Pulchinello found new homes and audiences outside Italy, becoming the founding character for a variety of puppet traditions throughout Europe. Coming to England in the 17th century as a marionette (though he was already a glove puppet, too, in Italy), Punch as he became known soon moved from a comedy relief character in larger theater pieces at fairs, notably Bartholomew Fair, to a character with his own story, outlook, and personna.

England already had a long tradition of glove puppetry. Punch began life as a glove puppet "out front", doing fight schtick and inviting the public into see the larger marionette productions (you can see such characters in Hogarth look at right side of the photo for the glove puppets, with a painting of Punch with his wife, Joan, in a wheelbarrow).

Although there is a lot of exposition behind what is really going on behind the action of Punch (political and social, the rage of the lower/middling classes to the institutions that controlled their lives, and so on), suffice it to say that Punch represented the "great unwashed" who enjoyed the show for what it was and what Punch was able to do. 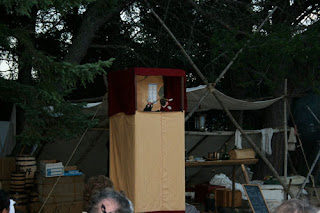 Even though the actual crowd at Grand Portage would not have seen something like this, Punch and his puppet cohorts had existed in the New World for a couple centuries, certainly being performed along the Atlantic seacoast according to various accounts (ref. Paul McPharlin's "Puppetry in America"). The audience attending this 18th century performance, albeit in the summer of this year, were definitely engaged. I was a bit apprehensive of the children in the audience, but they were even more vocal and boisterous, encouraging Punch, than their elders.

All in all, I want to thank Ft William Historical Park for "calling my bluff" and encouraging me, as a professional puppeteer in real life, to mount this show for their July rendezvous, and Grand Portage for inviting me to present, too. And most of all, the audience. I believe that puppeteers and reenactors are the two groups who present the best audiences for this type of show, understanding both the context and temper of the times, and the Art. 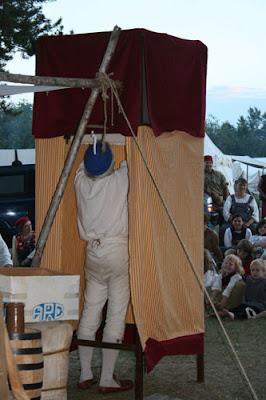 Next up for Punch, the North American Voyageur's Council Fall Gathering (NAVC) in November at Folle Avoine, Danbury WI.
Posted by The Clerk at 7:53 PM No comments:

This year's trip to Grand Portage started earlier than usual, picking up Gene Tisdal, Henri, at the Duluth airport before arriving late at night, well early in the morning, in the 18th century of Lake Superior's premier historic site and encampment. You can see a few of the sights on FrontierFolk postings such as this one (check a few others on the Colonial Nouvelle France/New France section of FF). 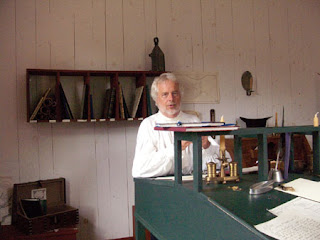 As usual, the week in the countinghouse talking with visitors to the site and interpreting both fur trade history and the business end of the . . . business was terrific! In addition, the Department of the Interior has been filming a movie for the interpretive center at the site since July and was using the August Rendezvous to move into high gear, filming canoe brigades on the Lake, the Native inhabitants of the Portage, and the frenzy of activity that took place during the summer while trade goods from Montreal where unloaded for distribution to the interior and furs from the interior posts were readied for the journey to Montreal. 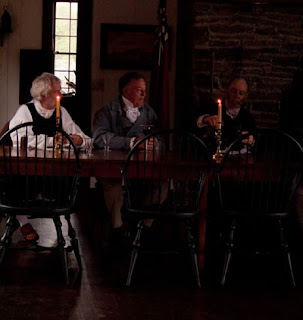 Many photos from the week, and the shoot, have been posted on Frontier Folk and FaceBook. If you have trouble finding some of them, let me know and I'll pass along the URLs since there are just too many to post here.


A few here may whet your appetite. The partners meeting is a traditional event, with the various wintering partners reporting on the year's returns and the trade good needs for the coming year. 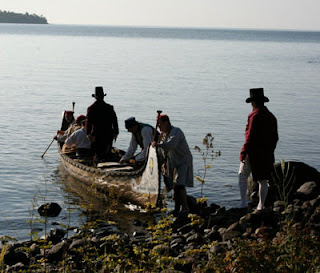 At the end of the Rendezvous, the partners who don't winter over leave for the safety and comfort of their hearths in Montreal, while the rest of us return to the interior and the search for our "gold", the beaver fur.


Next up, part two, Punch and his wife attend the Rendezvous at Grand Portage.
Posted by The Clerk at 7:42 PM 1 comment:

This is the first in a flurry of posts; I probably should space them out but I've got the time over the long weekend so here goes:

Gall nuts are starting to appear. Apparently, the weather or something has delayed the wasp egg laying component here in the Upper Midwest. I've been finding gall nuts, though not as abundantly as I would hope. Going up to the oak savannah in Anoka MN next week to check out the supply there.

The gall nuts I have found have ranged from dried to green and probably still containing the larvae. They are, for the most part, rather large. I've picked a few green ones as an experiment to see how they compare.

Next up, Grand Portage's countinghouse and the movie filmed there, and Punch and Judy arrive at Grand Portage from the 18th century. See you in a day or so.
Posted by The Clerk at 1:49 PM 1 comment: