As promised, a couple of photos of the completed fishnet. 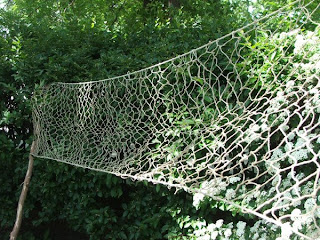 It ended up much longer than expected.

The whole net ended up about 16' long. I would like to have made it wider, but to be honest, I was really getting restless and needed to complete other work. I ended around 2 1/2'.


I wanted to try making the fishnet in the manner of the pictures in Diderot and others. I have found some very much simpler instructions, but not documentation that anyone "did it that way". 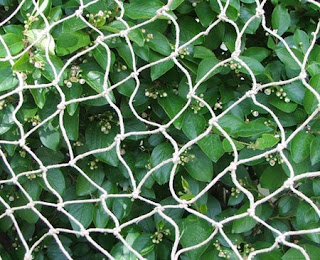 What this blanket cost . . . and the beat goes on

Having established the wholesale price of 5s (five shillings) for a single blanket, what would the actual cost be, say in Grand Portage, Fond du Lac, Athabasca, and so on.

As any business knows, the factor in determining price (besides desiring to provide room for profit) is "overhead". In the case of our blanket heading into Upper Canada and the Northwest ("Northwest" being anything "Midwest" nowadays from Ohio through what is now Minnesota, the Dakotas, and into Canada), overhead was figured on the cost of goods at Grand Portage (or Kaministiqua later, or Rainy Lake) plus equipment items for personnel and interest. Two different interest items are noted in at least on account in 1801 (H. Innis, The Fur Trade in Canada, p. 243; Coues New Light I, 4 and 200-1): interest on goods for the year plus last year's inventory, plus an interest percentage added which included the previous year. To all this is added the cost of freight to carry the furs back to Montreal and wages.


More specifically, overhead included: personnel wages (the proprietor, interpreter, and clerk), transportation which included the wages of the voyageurs to and from posts and Montreal (the men paddling canoes, lugging goods across portages), the cost of the canoes, any tariffs/duties/fees/licenses, interest on goods (both current and carried past year), the costs of upkeep of the Grand Portage depot and particular post, gifts, spoilage, the "outfit" given to each employee each year, and so on.

This latter cost, the clothing and equipment given to each man, was more than off-set by the fact that wages were for the most part paid in goods (Innis, pp. 240 ff, footnotes). And given daily necessities of the men (clothing worn out, tobacco and alcohol, and so on) and the inability to bring much in the way of possessions west, goods were often "advanced" to the extent that wages were never paid. In fact, many men owed years worth of service after a single "tour of duty" (Innis).

Figuring out what the actual overhead for individual items was is nearly impossible, though some educated guesses can be made. A few examples suffice:

40% seems a bit high, though the rate was probably variable depending upon the year, the rate of return on furs, competition, and so on. This variability lead to the NW Co. establishing, in 1804, a rate of increase or "tariff" to be assigned to calculate the freight and "advance" on price westward.

At Kaministiquia (what became called Fort William), in 1804, the advance in price was deemed to be 23% on the Montreal "Cost of all Goods without reserve." (NW Co. minutes, in Can. Archives, Innis, and Wallace Documents)

Other sources (La Rochefoucault in La Rochefoucault-Liancourt's Travels in Canada 1795, p. 115) indicate a 3 times advance in Detroit, 4 times in Michilimackinac, 8 times at Grand Portage, 16 times at Winnipeg, all on the usual value at Montreal.

The two examples, Pike and La Rochefoucault, I believe, indicate more of a "retail" price markup (including profit for the merchant) rather than reflecting a simple overhead cost markup. But they still give some idea of what needed to be factored into the cost of this blanket as it headed west for trade in exchange for furs.

Therefore, let us take 7-9s at Grand Portage, as our base wholesale price (which includes overhead to GP) for a 2 1/2 point blanket. This blanket traded, usually for 3 (sometimes later 4) beaver pelts.

What was the cost to the Native trappers on this basis, and what return did the 5s, now 7-9s blanket bring?

The Clerk
Posted by The Clerk at 1:17 PM No comments:

What this blanket cost . . . stanza the third

Having taken the 2 1/2 point blanket as our basis and accounting the cost in terms of £ Halifax "money of account" reckoned in Canada (to be compared to the £ Sterling), let's take a look at what the price of the blanket would be. At this point, we're still talking about wholesale price (the imported price which a fur company would pay in Montreal for blankets to be shipped to what became called "Upper Canada" in the 1790s).

Examining a 1791 shipping inventory supplied by Dobie Badgley & Co. of Montreal to the Grant Campion & Co. traders at Michilimackinac we find: pr [a pair of ] 2 1/2 pt blanket at 10/ (ten shillings).

Figuring that this price is indicative of a two-blanket pair, we arrive at the wholesale cost for a single 2 1/2 point blanket to be 5/ (five shillings).

I have not been able to examine shipping records from England, nor the more complete records of fur trade inventories/accounts housed in the Archives of Ontario and other repositories, so I do not know the "origin" price per unit. However, for our purposes, this 5/ figure should suffice.

Knowing the wholesale price of the single blanket coming from Montreal is only part of the story, in determining what this blanket cost. Setting aside duties, fees, etc. at the dockside (not inconsiderable, but figured I think into this wholesale price along with insurance of goods shipped from England and so on), there are a number of other factors which determine the ultimate price.

Just as today, there is a "markup" of goods for sale. This markup today can vary from a few percent to as much as 50% and more. Factors such as the "overhead" of shipping (labor, vehicles, wages, storage), projected incurred losses, "gifts", not to mention profit are a necessary ingredient to fixing the ultimate price.

Whether a blanket was sold in Quebec, Montreal, traded at Grand Portage, Snake River, or Athabasca these factors needed to be accounted for by the merchant and trading partners.

For the fur companies, another consideration was the ultimate price to be gotten for furs returned for sale to England. The difference in price structure between the time goods were purchased and furs arrived in London for sale at auction could be considerable, and either fantastically profitable, or ruiniously depressed. This lead to a number of plans throughout the period, both French and British, to control and stablize prices (without much success). These schemes, however, are not within the story here.

Next up, overhead, returns on the beaver pelt, and what the price/cost represented (in "real money" of the time).
Posted by The Clerk at 1:37 PM No comments:

As if the life of a clerk is not complicated enough, what with keeping up with 18th century finance and trade, ink making and writing, not to mention having a real life (as we know it) . . .

I decided since fish comprise a huge portion of the food eaten at posts of the fur trade, and that much time is spent catching those fish or fixing nets, I needed a net.

How hard is it to find a good, period net?

I don't know. I haven't found one.

So, I determined to make my own out of hemp cordage. I'll post some photos when I have a chance. Suffice it to say, after a week of off and on construction, I know how a fish net was constructed, not to mention the actual act of knitting the whole thing together.

Inch by inch, row by row, gonna make my netting grow . . . all it takes is some hemp knit so, and someone with no time to really spend on it . . .
Posted by The Clerk at 1:22 PM No comments:

What this blanket cost . . . stanza the second

In a sense, price and value are two very different things. I will set aside "value", that is what is this thing worth in relative terms (whether contemporaneously or today) for a later discussion.

When speaking of the price of the blanket, the cost can be denoted in a variety of period monetary values from English guineas and shillings (gold/silver) to French Louis d'or, crowns, pistole, and sols (gold/silver) to Spanish milled doubloons or 4-pistole pieces, milled dollars, and pistareens (gold/silver) to Dutch Johannes (gold), or even later the US Eagle or dollar (gold/silver).

All these currencies were floating around, in varying amounts and accessability. For the purposes of the fur trade of the latter 18th century, a denomination in Canadian/English currency is appropriate, though the standards there, too, were dependent on and pegged to Spanish gold and, more precisely, Spanish silver dollars.

But let's just refer to the standard currency denomimates of Canada for this period.

In Canada, post Conquest, there were a number of currency standards in play. Without rehearsing a lot of economic history, let us refer to the shilling.

There were:
*Shillings, denoted in Sterling exchange
(that is, shillings as pegged to the English pound, and the price of silver)
*Shillings, of a variety of denoted but not actually minted
(shillings with a different silver exchange rate than the £ Sterling)
Halifax
Quebec (New England)
Newfoundland
York (as in New York)
Of course, there were other monetary valuations: ancien cours (livre/sols, from the French regime in Canada and still used after the Conquest for accounting), Grand Portage livre (GP, a differing valuation form of livres) for a few examples. This does not include, as yet, a discussion of commodity exchange price (ie beaver pelts).

All of the shilling denotations were in play at various times and in various places in Canada.

Interestingly, the dominant coins in Canada were French: French Crowns and half-Crowns and pistareens.

Also, coins often were in such short supply that exchange rate competition between Canada, England, and the American Colonies became a point of contention. The Halifax rating held the Spanish dollar (the "universal" standard of silver) at 5 shillings, above the accepted 4 shillings 6 pence (d) sterling. The point being to attract silver and coinage to Canada at this rate.

For our purposes, though, the £ Halifax valuation and the English £ Sterling will be the standard by which we will determine "what this blanket cost".
Posted by The Clerk at 9:34 AM No comments: