The following is an excerpt from the journal kept for the post at Riviere d'Aigle in the fall of the year:


Sept. 29 Wednesday Rainy cool weather. Arrived riviere d'Aigle in the late afternoon   as the house is already built we Moved our goods and other supplies inside and Readied for trade. Mr. Oakes being yet upon the Portage I expect him tonight  We shall greet him with a fire, a pip, and a toast to our Safe journeys here.

30th Thursday Sky clear temp 44 Heavy dew  We were up early lighting a fire and awaiting the arrival of the local band of Sauteur The post was occupied all day with comings and goings though Without much trade activities.  old A-- brought in some castorum and a few musquach  the Night was passed quietly until the Men got into a keg of HW. 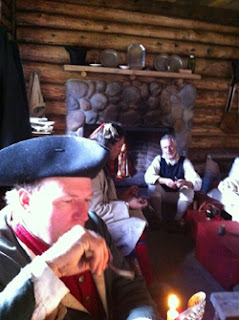 Fri Oct 1 Cool 36 degrees at dawn the Post was comfortable at 50 degrees A fire was laid in preparation of the day. Piere des Auniers accused one of the men of stealing his Cassette we discovered a keg full of water upon a shelf, this after much desire of water but none willing to fetch it.

Soon we were busy with many Natives arriving to trade and Look over our goods. The day which had been overcast became Rainy shortly after noon Many of our visitors came I believe mainly for the warmth of our fire Mr Oakes exhorted them to trade with us and bring us their Furrs and meat.


Sat the 2nd Cool 37 degrees Parly cloudy Last nights Regale has made for a quiet morning A-- a local free trader came by this morning and shared the meat he had taken this morning.  Passed the day giving credits to 3 families that came on their way to Winter camp. Sun later but quite cold.


The text ends abruptly in torn pages. Perhaps the rest will come to light upon investigation. In the meantime, your Obt Clerk is obliged to return to the accountbooks.
Posted by The Clerk at 6:22 PM